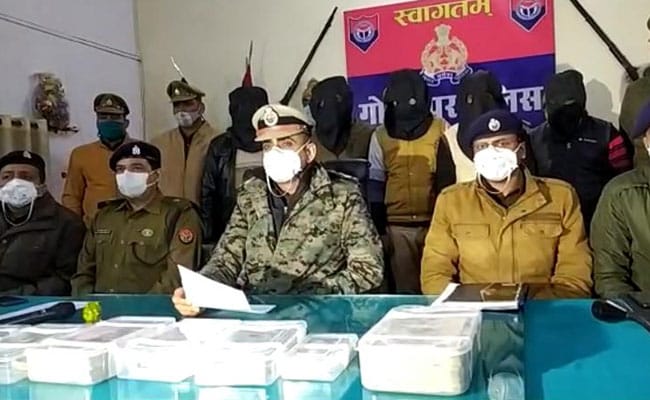 Four policemen have been arrested for allegedly robbing a jeweller under the pretext of a checking drive on a highway in Uttar Pradesh’s Gorakhpur. The four were posted in Basti district, 200 km from state capital Lucknow.

Two informants who helped the policemen track the jeweller before making their move have also been arrested, the Gorakhpur police said in a statement.

Sub-inspector Dharmendra Yadav and three other constables posted at the same police station in Basti have been identified as the accused.

The jeweller and his assistant had taken a bus from Gorakhpur to Lucknow on Wednesday.

The four policemen, still in their uniform, stopped the bus on the highway that leads to Lucknow, boarded it and asked the jeweller and his assistant to get down under the pretext of checking them. The jewellers were then taken to an isolated area where they were robbed, the police said.

The Gorakhpur police said they have recovered Rs 19 lakh in cash; gold and silver worth Rs 16 lakh and a car used in the crime.

During questioning, the police said the four accused were also involved in a similar crime in the city last month, when men posing as customs officers robbed a jeweller.

The four accused will face charges under the stringent National Security Act, the police said. All the four will be sacked from the police, Gorakhpur police chief Jogendra Kumar said in a statement.

March 3, 2021, No Comments on CDC guidance for people who have been fully vaccinated expected later this week

March 3, 2021, No Comments on ‘Raya and the Last Dragon’ celebrates Southeast Asian culture