Read to know the fun banter amid inmates Rakhi Sawant and Arshi Khan’s fun-banter regarding Rakhi’s husband Ritesh gifting his wife gifts on this Valentine’s Day. 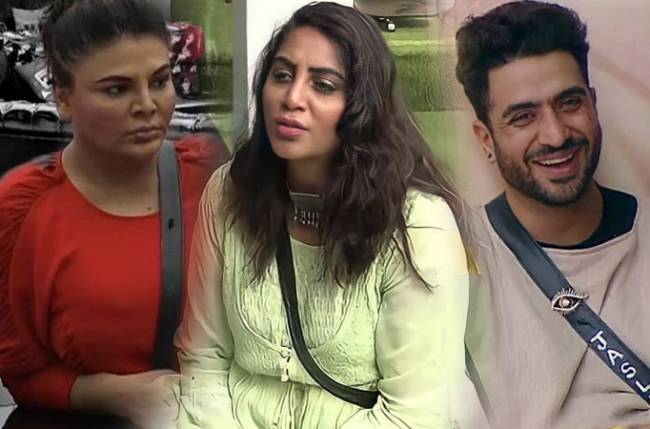 MUMBAI: Bigg Boss 14 contestant Rakhi Sawant, who is head-over-heels in love with Abhinav Shukla on the show and seemed to have forgotten her husband Ritesh, is finally talking about him again. In the latest episode of the show, Rakhi was seen telling the housemates that her husband is going to send her gifts on Valentine’s Day.

Hearing this Rakhi’s arch-rival Arshi Khan mocks her and says till now your husband has not sent a single thing why will he send now. She also questions Rakhi if the letter sent on the show during Christmas was really from her husband or the makers forged it for her.

Rakhi gets angry and tells Arshi that she is jealous of her and the latter starts troubling her by saying that if she ever meets Rakhi’s husband, she will snatch him from her. The Main Hoon Na actress shockingly stares at Arshi.

Arshi doesn’t stop and keeps confessing on camera that she loves Rakhi’s husband Ritesh a lot and doesn’t mind if he is bald, she still loves him. She says that she can even kill herself to be with him and Rakhi’s husband is only hers. Rakhi gets angry and warns her to be away from Ritesh. She even jokes that if he would be watching all this, he would immediately call up Arshi.

Aly Goni cracks a joke in between and says that you two are fighting for him here and he would be having fun with someone else outside. Rakhi, Arshi and Aly all burst into laughter.

Arshi looks into the camera and tells Rakhi’s hubby Ritesh that she is his saali (sister-in-law) and loves him a lot.

Arshi was doing all this in order to pull Rakhi’s leg. Soon, the two wrestle with each other and Arshi keeps laughing while Rakhi gets annoyed.

Keep reading this space for more updates from Bigg Boss 14.