Krystle D’Souza is a popular actress. Read to know who her favourite BB 14 contestants are. 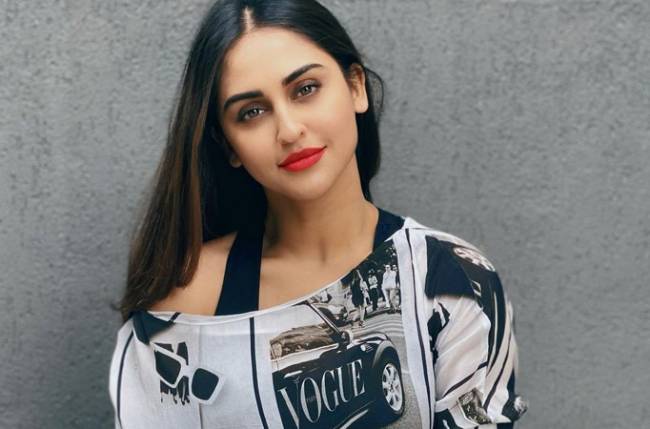 The actress while being papped by the media revealed two of her favourite contestants of the Bigg Boss 14. The actress as stepped out of a salon was quizzed about the ongoing season, where she revealed of Aly Goni and Abhinav Shukla being her favourites. She mentioned though the two have been at loggerheads in the house on several occasions, she assured they will becomes friends after they exit the show. Also, when asked about her take on former Bigg Boss contestant Devoleena Bhattacharjee’s presence in the house, she had funny reply.

The diva is heard saying, “Main Bigg Boss ki owner lagti hu, (laughs) mujhe kya pata.” She is all praises for Abhinav and Aly, she further added of liking everyone in the house. Krystle after stepping out of the salon posed for the paparazzi by posing on a camera person’s electric bike. She is seen in casual, sporting a white short top, paired with black pair of ripped jeans and sporting red lip colour.

Recently, Krystle posted a picture giving a sneak peek of her new home, she wrote in her Instagram post, “Stepping into my new home in this new year !Right now it’s all walls and beams, I can’t wait to do it up with hopes and dreams Dreams do come true if you come through.”

April 21, 2021, No Comments on Ayushmann Khurrana gets nostalgic as ‘Vicky Donor’ turns 9

Shraddha Kapoor gives a glimpse of her lockdown life

April 21, 2021, No Comments on Shraddha Kapoor gives a glimpse of her lockdown life

‘Chehre’ producer reveals why Rhea Chakraborty why missing from the poster

April 21, 2021, No Comments on ‘Chehre’ producer reveals why Rhea Chakraborty why missing from the poster