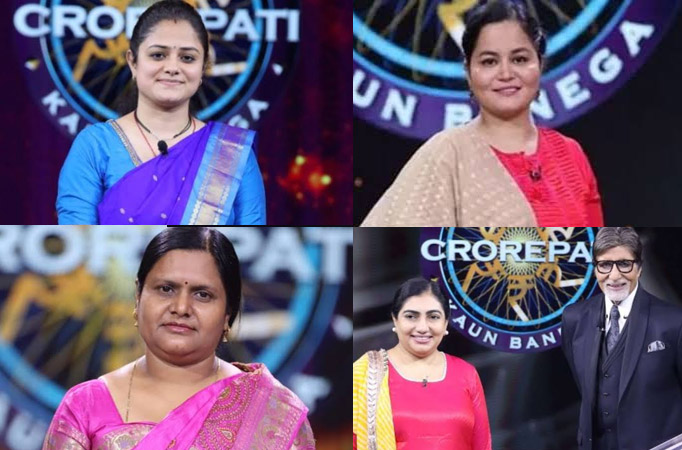 MUMBAI: Knowledge knows no gender and Sony Entertainment Television’s flagship show Kaun Banega Crorepati Season 12 turned out to be a powerful reminder of the same as four women from distinct socio-economic backgrounds, geographies and work profiles, turned out to be the only crorepatis this season!

At the beginning of the season, when registrations were about to open, the show’s mega host, iconic actor Amitabh Bachchan had recited a moving verse which reiterated – “Har Cheez Ko Break Lag Sakta Hai, Sapno Ko Nahi”. Dreams turned into reality for Nazia Naseem, Mohita Sharma, Anupa Das and Neha Shah as they went on to become the crorepatis this season. All these four women set an important precedent about how education, equality and excellence can go a long way in making one shine. No matter how different the four winners are, they are tied together by a common string — the power of knowledge, the thought that KBC has promoted right from its start.

In their own little ways, these women are out there to make a difference in the world through their work in various fields like the corporate world, teaching, medical profession and policing. Sony Entertainment Television is proud about having such inspirational women on the KBC Hot Seat, and hopes that many more women are empowered to dream, and to work towards realizing their dreams.

The season finale will see Subedar Sanjay Kumar and Subedar Major Yogendra Singh Yadav, both Param Veer Chakra Awardees, on the Hot Seat as the Karamveers. As the Kargil War Heroes, they narrate their courageous tale and set an example of sheer grit and determination. Tonight’s episode will certainly evoke emotions of pride and patriotism in each one of us.

Before the finale, here’s a quick look at the four crorepatis of this season!

Nazia Naseem, the first ‘Crorepati’ of KBC Season 12, hails from Ranchi, Jharkhand. She moved to Delhi in 2004 to do a PG Diploma in advertising and PR from the famed Indian Institute of Mass Communication, and currently works as a communication manager in the national capital. A believer in equality for all genders, Nazia is proud that she was not just raised by a feminist father, but is also married to a feminist man. A mother to a 10-year-old boy, she intends to raise him with the same values. She gives the credit of her participation in KBC to her mother who has been a die-hard fan of the show and of the host Amitabh Bachchan. Nazia shared that she and her father used to go to the telephone booth early morning to answer KBC’s participation questions, and Lady Luck shined upon her after having tried for more than 8-10 seasons over the years. Overjoyed about her win, she exemplified how if a woman has a supportive family, everything in life is possible and achievable. She decided to invest money for the medical needs of her parents and in laws, in securing her son’s future with soccer training, and also for charity.

Mohita Sharma is a 31-year-old IPS officer of the 2017 batch from Manipur. A native of Kangra, Himachal Pradesh, Mohita was born and brought up in Delhi. After her graduation, she put her mind and efforts to crack the civil services examinations. Her determination was exemplary as it was after constant efforts for five years, she made the cut in 2016. She was initially appointed in the Election Commission of India, but gradually she has made it as an Assistant Superintendent of Police. She has 2 police stations under her supervision, and sets a strong example of women making inroads into the road less travelled. She believes that it is high time people stop underestimating the power of a girl child. For Mohita, coming to KBC was a matter of sheer luck by chance. It was actually a dream harboured by her husband, civil servant Rushal Garg who had been trying to be on the show since 2000 and who motivated her to give it a shot. While destiny played its part in bringing Mohita to the Hot Seat, it was the tough preparation for her Civil Services exams that helped her crack the Rs 1 crore jackpot on KBC.

Anupa Das hails from Jagdalpur, Bastar in Chhattisgarh. It was a moment of sheer joy and pure emotions for her when Amitabh Bachchan announced that she had given the “Sahi jawaab” to the Rs 1 crore question on the show, because what brought her to KBC were her needs and dreams. She went back with both fulfilled in a way. A teacher by profession, 42-year-old Anupa has been on a roller-coaster since 2019 when her mother was diagnosed with Stage 3 Cancer. That is what brought them from Chhattisgarh to Mumbai, which presented new kinds of challenges everyday for the family. Being on KBC is a dream she had been pursuing since 20 years, she shared with Big B, who was mighty impressed with her confidence and hailed her performance on the show as “extraordinary”. Anupa, one can say, is extraordinary in the sense of highlighting how it pays to stand the test of time with a strong will and positivity in the heart. A fan of KBC, she believes it is a must-watch for students for whom it makes a great mix of entertainment and knowledge.

Neha Shah is a doctor, a profession that has earned widespread respect from all and sundry in the wake of the global pandemic. As a frontline warrior in the fight against the pandemic, Neha worked in both government and private clinics to treat patients from all rungs of the society. The 45-year-old, who hails from and lives in Mumbai, comes from a family of doctors. Her 88-year-old father still goes to their clinic, and it was his passion to see his daughter to take his legacy forward. She wants to make her own identity. It had been Neha’s dream to  sit on the KBC Hot Seat. Now that it has come true, and she has even bagged the title of ‘Crorepati’, she wishes to open her own clinic — a mini hospital kind of setup — without taking a loan. She also wishes to conduct small camps in the interest of the lesser privileged of the society, in her bid to do her bit to promote good health and wellness. A doting daughter, she also wants to send her parents on a tour.

Mississippi’s capital city hasn’t had clean water in weeks, and there’s no end in sight

March 6, 2021, No Comments on Mississippi’s capital city hasn’t had clean water in weeks, and there’s no end in sight

US hiring surges in February as Democrats move on stimulus

March 6, 2021, No Comments on US hiring surges in February as Democrats move on stimulus

New Delhi school board to have continuous evaluation, focus on employablility: Kejriwal

March 6, 2021, No Comments on New Delhi school board to have continuous evaluation, focus on employablility: Kejriwal

March 6, 2021, No Comments on Another Pakistan university introduces dress code for girls