Varun and Natasha will get married on January 24, 2021 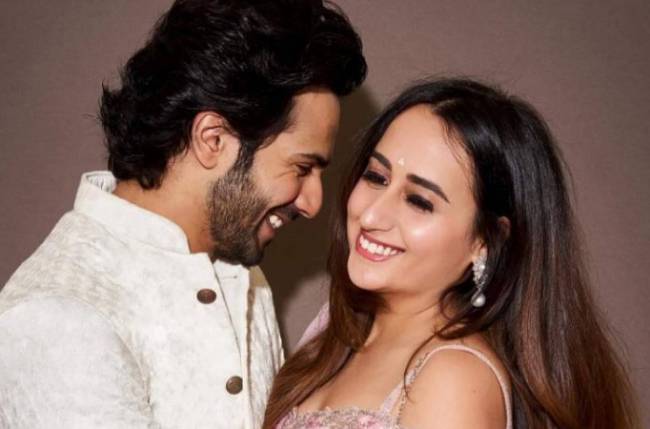 MUMBAI: The wedding news of Bollywood actor Varun Dhawan and his girlfriend Natasha Dalal is all over the media, and the couple is all set to take the wedding vows on January 24 and the families are all prepped for the pre-wedding festivities that will begin tomorrow. The couple has already dashed off the wedding venue in Alibaug for the lavish function that is scheduled for all this weekend. While the internet is waiting with bated breath for VD’s wedding functions to begin, here’s what the couple is expected to wear on their D-day.

Recently, Dhawans and Dalals’ staff was snapped carrying soon-to-wed couple’s trousseau, pictures of which made it to the internet. In the snaps, one can see gorgeous couture being taken in the house. Going by the pictures, the attire seems to be a heavily embellished pastel coloured lehenga. It shows the hues of pink and nude. As per online reports, Natasha Dalal, who’s herself a designer has reportedly designed her wedding outfit. Varun Dhawan, on the other hand, is expected to wear designer Kunal Rawal’s couture.

ALSO READ – (Animal: Here is what Parineeti Chopra & Anil Kapoor will play in this thriller)

Varun Dhawan and Natasha Dalal will reportedly tie the knot at The Mansion House, which is a luxurious 25-room resort in Alibaug. Their wedding festivities will begin from January 23 and will conclude with a lavish wedding reception which will see limited guests in attendance.

As the new norms and COVID restrictions, the guest list has been restricted to close ones only. From Bollywood, Salman Khan, Katrina Kaif, Alia Bhatt, Ranbir Kapoor, Karan Johar and Jacqueline Fernandez are expected to make an appearance at the wedding.